The Popular Windsurfing Event In The Caribbean 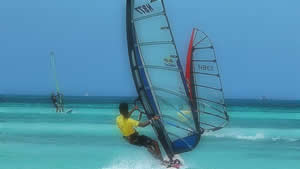 Aruba is undeniably blessed with the most ideal wind and water conditions in the Caribbean. Aside from its picturesque, crystal clear waters, a lot of people keep on visiting the place because of the countless activities and water sports that it offers. Its restaurants' mouth watering menus, exceptional hotel accommodations and exciting yearly events also explain why visitors come to the island from time to time. One of the annual events that people look forward to is the Aruba High Winds.

This event was first organized by two local entrepreneurs in Aruba back in June 1987. Antony Blok and Ruben Croes proposed a sailing event and chose Eagle Beach as its location at that time. Due to the fact that the first High Winds event became successful, the Professional Boardsailing Association decided to authorize it. They even decided to make the event as part of the 1988 World Tour. From that time on, the event has developed into one of the top windsurfing events in the globe. Former windsurfing world champions such as Anders Bringdal, Bjorn Dunckerbeck and Robby Naish even come to this yearly event.

Through the years, this event has obtained the support of the Aruba Tourism Authority or ATA. It was even funded by the Aruban government in its first ten years. They aimed to attract the greatest professional windsurfers coming from the different parts of the world to come to Aruba.

However, in the year 1997, the government had to limit its support to the event. From then on, the organizing committee opened their doors to novices. The High Winds did not just become a top professional windsurfing event but also turned into an exciting and fun occasion for beginners. The organizing team even focused its efforts to make sure that the sportive image of Aruba is improved. Freestyle windsurfing and kite boarding were even added to the program, making the event thrilling and more successful every year.

Aruba High Winds has long been one of the biggest windsurfing events in the island. It has also been famous for having a very extensive and exciting entertainment program that experienced and amateur windsurfers come to Aruba annually. They flock to the place to enhance their skills in slalom racing, free styling and kite boarding. Aside from trying to get the "King of the Huts" award, they also visit the island to have a blast on and off its waters.

Last June 30 to July 5 of 2010, people gathered together in Fisherman's Huts, Malmok, Aruba to participate in this windsurfing event. Once again, High Winds became a very successful event. Jaloue Langeree, an expert kitesurfer from Netherlands, also demonstrated her skills in kitesurfing to boost the event's profile. The Slalom, Freestyling and Kiteboarding racing events ended with happy windsurfers and spectators.

The DJs also kept the sounds spinning during its beach dinners and parties that were sponsored by Arubas famous restaurants. Several live bands even played their songs and people really enjoyed them. Food and drink stands were also all over the place for people's convenience. A Capoeira workshop, Bula fashion show, and Jerk Dance and Body Painting competitions were even held during the event this year.

The windsurfing event this year was truly a success. Just like the previous years, it has always been motivating many amateur windsurfers to pursue their interests in windsurfing and kite surfing. So, whether you are a conventional slalom racer or a fearless freestyler or you simply want to enjoy the even, or perhaps experience windsurfing and kitesurfing yourself, the Aruba High Winds will always be an event that you can look forward to each and every year.