And Other Important Facts 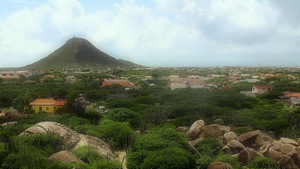 From over 50,000 people in 1950, the population of Aruba increased to about 106,000 in 2008. A substantial number of people in this small island are actually employed in industries relating to tourism even if there is also a big chunk working in the oil refineries in the area. The population density in this Caribbean jewel is 529.5 per square kilometer, based on figures in 2000. The growth rate of the population of Aruba from 1980 to 2000 is estimated at 2.7%. Because of the popularity of Aruba as a main tourist destination, the standard of living in this island is extremely high compared to other countries and islands in the Caribbean and South America. This is probably one reason why the population growth in Aruba is not really that high.

The population of Aruba is believed to be 80% mestizo (which is a mixture of Spanish or Dutch and the indigenous population) and around 20% come from other ethnicities. Although only a negligent number of people are 100% aboriginal, the heritage of the Arawak tribe is still very prominent in the people of Aruba today. You will see that the genetic features of the Arawaks on many of the locals in this Caribbean island. Although Aruba population is mostly descended on the Aboriginal heritage, you will see people with pure Spanish, Dutch, and Italian descent. You can also see some with African, British and even French ancestry.

With the beauty of Aruba, it is not really surprising that many foreigners would like to stay in this small island. However, the local government is getting concerned by the steady increase in immigrant population of Aruba. To remedy this situation, new immigration laws were introduced in 2007 to prevent foreigners from staying or working in the island for more than 36 months residency.

Aside from the population of Aruba, there are probably other things that you might want to know about this beautiful hideaway. For one, the average life expectancy age for males in Aruba is 71.6 years and for females it’s 76.8 years. The climate in the island is mostly sunny, with a temperature of around 27 degrees Celsius or 81 degrees Fahrenheit. Meanwhile, the official languages in Aruba are Papiamento, or the native language, and Dutch. However, English and Spanish are also widely spoken by the people particularly in the main tourist spots. Although majority of tourists in Aruba are Dutch, visitors from the US, Spain, and other European countries also frequent this Caribbean jewel.