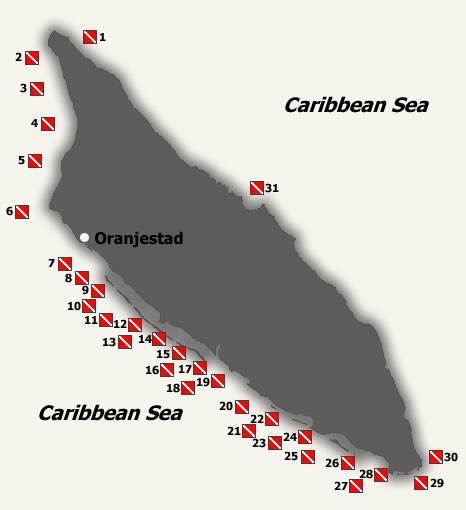 1. California Wreck (30'-15')
This fascinating wreck is located at a depth that is very exciting for underwater photography. The wreck is surrounded by large coral formations and an abundance of tropical fish. This dive location is only for advanced divers, due to currents and occasionally choppy seas.
The California made history as the ship that received, but did not react to, the S.O.S. signals from the Titanic. The ship is almost 100 years old and is on the north coast of Aruba. [Top]

3. Antilla Wreck (60’)
Locally referred to as the "Ghost Ship" this German freighter (brand new at the time) was scuttled on May 10, 1940 when the Germans invaded Holland during World War II. The largest wreck in the Caribbean (400’ long), it is great for penetrations due to the large compartments of this vessel. Covered by giant tube sponges and coral formations, the wreck is surrounded by lobsters and tropical fish. [Top]

4. Malmok & Debbie II (70’)
Paths of wildly spread leaf and brain corals await you at this bottom-reef.This reef is known for its huge lobsters and stingrays taking their daily "siesta" waiting to be photographed. Giant barrel sponges in purple, orange and green are found everywhere. In 1992, a 120’ fuel barge was sunk as an additional attraction. The wreck attracts schooling fish and barracudas. [Top]

5. Pedernales (25’)
A beginner’s paradise offering a combination of large pieces of wreck spread out between coral formations. You can see sections of cabins, wash basins, lavatories, etc. as well as the pipe line system that goes with this oil tanker, which was torpedoed in 1942 during World War II by a German submarine. [Top]

6. Harbour Reef/Pilot Boat (40-100’)
Super dive! Gradually dropping through magnificent formations of hard and soft coral to an old pilot boat, where a pair of green morays await your arrival. On occasion spotted eagle-rays and stingrays can be seen. Favorite of many for good photography opportunities. [Top]

10. Barcadera Reef (20-80’)
A very healthy and beautiful reef. Very dense reef with large coral formations. Many brain corals and an abundance of huge sea fans in the shallows. [Top]

11. Kantil Reef (40-110’)
Fascinating "drop off" with giant boulders of brain & star coral. Also an abundance of massive formations of leaf and sheet corals. Between 60 and 80’ you may see a sleeping nurse shark. [Top]

13. Jane Sea Wreck (20-100’)
A 250’ cement freighter sitting upright on the bottom in 90’ of water. The wreck attracts lots of schooling tropical fish and large barracudas. Deep water gorgonians, sponges and coral growing on the wreck. Excellent for photography. [Top]

14. Plonco Reef (20-100’)
Home of the green moray! Large morays welcome you. Large lobsters can be found here scavenging the ocean floor for a bite to eat. Giant coral formations contour the landscape. [Top]

16. Gino’s Choice (20-120’)
This site consists of a cool drop-off with huge brain and star coral leading down the slope to the bottom. Lots of sea fans salute you as you cruise along. [Top]

17. The Finger (20-120’)
The reef comes out like a finger pointing down to the deep water. Beautiful coral formations, sea fans in the sand surrounding the finger. Moral eels, tropical fish are seen every dive. Keep your eyes open for an occasional turtle cruising by. [Top]

19. Mangel Halto Reef (15-110’)
A pronounced slope from 15’ down to 110’ gives you the opportunity to admire a myriad of coral combinations. You will see brain coral to deep water gorgonians, sea anemones, tube and vase sponges and all types of marine life from octopus to sea horses and schools of tropical fish. Accessible from the shore. [Top]

20. Spanish Lagoon Reef (20-120’)
This site consists of a drop-off with huge brain and star coral leading down the slope to the bottom. Lots of seafans salute as you cruise along. [Top]

21. Isla de Oro Reef (20-90’)
The shallow portion of the reef offers many different combinations of brain, staghorn, star and plate coral. Lots of sea fans and soft coral also enjoy this site. Under the coral formations you can sometimes find lobsters. [Top]

22. Santo Largo (30-110’)
The slope starts in 30’ of water taking a drop as far as the eye can see. Awesome coral formations, lobsters, schooling fish overwhelm. [Top]

23. Commandeurs Reef (40-90’)
Sloping into the deep, formations of sheet and leaf coral rise to decorate this dive. Extensive marine life such as snappers, groupers, grunts and angel fish, while runner, jacks and barracuda patrol the area on occasion. [Top]

28. Santana Reef (20-50’)
Myriad of elkhorn and staghorn coral with an abundance of marine life. [Top]

29. Six Sisters (45-100’)
Huge rocks in the sand in 90’ of water. Rocks are covered with colorful sponges. Huge barrel sponges, sea fans, stingrays resting in the sand around the rocks. [Top]

30. Cabez Reef (50’)
Due to strong currents, for experienced divers only. Come face to face with barracudas, amber jacks and rainbow runners. Also known for stingrays. [Top]