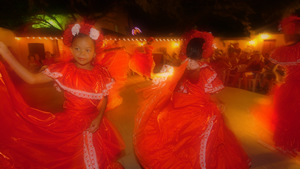 Going on holiday can be a time for relaxing and getting away from the many stresses of everyday life at home, but it can also be an opportunity to learn a lot about a new part of the world and the differences between the cultures of home and the chosen destination. One way of discovering such things is to visit an event such as the bon bini festival Aruba.

Aruba has a large influx of tourists throughout the peak season. This can largely be explained by the friendliness of local people and the perfect holiday climate of long sunny days and little rain. Like many countries in South America and the Caribbean, parties and festivals make up an important part of the social calendar. Some larger gatherings only happen once a year, however the smaller scale options such as bon bini happen every week, allowing even those with little free time available on the island to visit.

The pastel buildings in the city of Oranjestad make for an interesting skyline, especially in the bright Aruban sunshine. The most historic building on the island is that of Fort Zoutman, which is currently used as a museum full of fascinating objects from various times in the islands history. It attracts many visitors throughout the year.

Outside the museum is a paved area which is used once a week for the bon bini festival. It is a chance for visitors to learn a lot more about island life, but still enjoy the show.

One of many exciting displays throughout the evening is the dancing. The groups are made up of local people, dancing in their own carnival style. The costumes add bright colours and excitement to the spectacle, a true taste of the Caribbean. Although there are seats for people watching all the action, it is the kind of entertainment that makes a lot of people want to get up and join in themselves.

Islanders also bring traditional home made arts and crafts to the event, allowing visitors another insight into the area. Many objects are for sale, and are nice as keepsakes of a trip to the festival. Added to the mix is the music played by several groups, including a steel band, an organ grinder and soloists.

A view of local life would not be at all complete without sampling some authentic food and drink from the area. Islanders prepare different dishes traditional to them, offering them for sale throughout the festival. Although it all costs extra to the ticket price, nothing is very expensive and can offer more choice than a traditional sit down restaurant. For those who like cooking, an introduction to a different style of food and ingredients such as this can be fascinating.

Traditional folklore has had a large influence on the history on the island, as can be seen during the evening. Acts based on those stories and ideas help to develop a deeper understanding of local culture.

The bon bini festival Aruba may only last a couple of hours over the evening, but it can develop a deeper understanding of the area. There is a great deal of fun and flare surrounding the event, as it entertains guests as well as offering an introduction to the islands traditions. It is something even tourists on short stays can fit into their itineraries, and may add an extra something to those holiday memories.