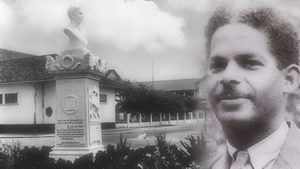 Europe during World War II was a dangerous place. German troops were forcing their way into many countries, taking over and dominating the people everywhere they went. A daring number of men and women living in these controlled lands banded together to form resistance armies to take back their freedom. Boy Ecury was one of these brave people who became heroes for putting their lives at risk to fight the Axis power.

Segundo Jorge Adelberto Ecury, later to be known as Boy, was born in Oranjestad, Aruba on April 23, 1922. He was the seventh of thirteen children born to affluent, Catholic parents. Boy's parents believed he was too rebellious and strong spirited to stay in Oranjestad and sent him and his brother Nicky away to school in 1937. After the other schools rejected the boys because they were black, they ended up at the Brothers of St. Louis in Oudenbosch, Holland.

Boy remained in Holland after graduation, and was in Rotterdam in May of 1940 when it was bombed by the invading German troops. Around this time he met another student from the Antilles, Luis de Lannoy, who soon proved to be a great friend. Luis was a part of a student resistance group, and was the one to introduce Boy into the fight for freedom. Boy and his new comrades in battle would harass and hinder the Nazi's in any way they could, like by setting their trucks on fire.

When Tilburg became too risky for someone as dark-skinned as Boy, he left to join the Oisterwijk Resistance Council. He retained contact with Luis by sending letters whenever he was able. With his fellow rebels, Boy continued to sabotage the Axis army in any way they could. They would rip up railroad tracks, and make bombs to blow up the German vehicles and equipment. The men of the resistance council would also aid and protect any allie pilots and soldiers they encountered, along with victims of the Nazi's.

Early in 1944, Boy received news that his old friend Luis had been betrayed and was now imprisoned in Utrecht. Boy attempted to stage a breakout to rescue his friend from the torture and endless interrogation. He was unsuccessful, but at least managed to avoid capture himself. Luis was able to escape in September of that year on Mad Tuesday during the chaos.

After his return to Oisterwijk, it was clear that Boy's swarthy appearance was drawing too much attention, so he returned to Tilburg in October of 1944 as the allie army approached. Later that month the allied forces fought their way into Oisterwijk, regaining control of the city. Boy could have joined his companions in liberation, but decided he would rather stay in the occupied territories to aid the struggle for freedom.

While moving around the area, Boy met up with commando resistance crew Knokploegen, who were wreaking havoc on the Nazis in The Hague. He joined their ranks, taking on dangerous missions such as an assassination attempt on a prominent member of the Dutch National Socialist Movement. The resistance groups were taking more risks and gaining more power as the war began to draw near it's end.

The events on November 5, 1944 marked the end of Boy, who was not destined to see the war finish. He was captured because of the betrayal by former friend Kees Bitter. The Germans arrested Boy as he was leaving mass, and sent him to the Scheveningan prison. The guards there questioned him about the Knokploegen and other resistance parties, but Boy loyally stayed silent. Because of his refusal to cooperate, Boy was taken out to the Waaldorpervlatke plain next to the prison and executed by firing squad a day later.

Once the war ended and fighting had ceased, Boy's father Dundun set out to reclaim the body of his son. He returned home to Oranjestad and buried Boy's body with military honors in 1947. A statue was erected in Boy's honor a few years later in the same city, along with a permanent exhibit about his life in the new nearby war museum. The Dutch government also awarded Boy with a Resistance Commemorative Cross in 1984 for the way he aided the war effort.

Boy's nephew Ted Schouten became very interested in the story of the revered uncle he had never met. He dug into the past and came up with the information to write a book called 'Boy Ecury, an Antillean Boy in the Resistance' in 1985, which was reprinted by the Dutch government fifteen years later. Ted was also approached by renowned Dutch director Franz Weisz, who wanted to make a movie about Boy and his father's search for his body, which came out in 2003.