A Brief History of Aruba 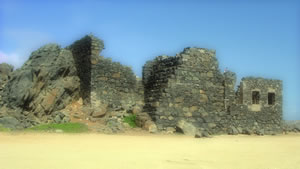 The history of Aruba dates back to around 1,000 AD when the Arawak tribe of the Caquetios Indians fled to Aruba from Venezuela to escape the brutality by the Carib Indians. Many Caquetios remained in the island, while others ventured to South America instead going to the other Caribbean islands mainly due to the strong currents and difficulty of crossing the nearby islands using canoes. However, in 1499, Spanish explorer Alonso de Ojeda arrived in Aruba and founded a colony on the island. Fortunately, the Caquetios did not experience the fate of the Carib Indians living in the other islands of Caribbean in the hands of the Europeans. Although many were maltreated and sent to Hispaniola to become slaves, they were not exterminated and totally annihilated like the Caribs.

The early history of Aruba was fraught with wars. For over 80 years, the Dutch and the Spanish conquistadors fought each other to gain control over this small but very beautiful island. In 1636, the Dutch won the war and took control of the whole island. During the Dutch occupation, the remaining Caquetios lived freely. From 1805 to 1816, however, the British took control of Aruba. In 1816, Britain had seceded control of the island back to the Dutch.

During the course of the history of Aruba, conquistadors from various European countries looked for gold. However, the precious metal was only discovered in 1824 during the Dutch colonization. Considerable amounts of gold were mined and became the main export of the country. In 1916, gold mines were forced to close down because the supply of the precious metal became quite scarce. Fortunately, another valuable commodity was discovered abundant in the island. Black gold was discovered and brought prosperity to this small country. In 1928, the first refinery controlled by Royal Dutch Shell was established and the history of Aruba was forever changed. The island experienced a surge in prosperity because of the substantial amount of oil pumped from its shores. However, in 1985, refineries in the country were forced to shut down because of global oversupply of petroleum commodities. Because of this, the people of this small Caribbean island decided to focus on tourism. Even with the reopening of oil refineries in 1991, Aruba still concentrated on the tourism industry.