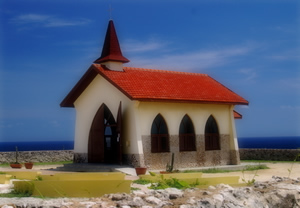 The Alto Vista Chapel is also referred to as “Pilgrims Church” is a small Catholic structure that is located on the hills above the north seashore northwest of the town of Noord. The church is painted a bright yellow color and stands out brightly against the azure blue sky and ocean.

The original Alto Vista Chapel was constructed by a Venezuelan missionary named Domingo Silvestre. His prime mission was to convert the local Indians to Christianity and it is said that this location was the beginning of his ministry. The name Alto Vista means “high view” and its location offers a view of the entire island. The proper translation in English is rendered as “Birds Eye View”.

The original chapel was built in 1750 by the Indians and Spanish. Domingo Silvestre arrived later and began the work of conversion using his own funds. The church was dedicated to St Mary, the “Mother of the Rosary”.

In the late 1700’s a tragic plague struck the island and many people died. The residents who survived who lived near the chapel, abandoned the area and moved to Noord. There, the people built the island’s second church, St. Anne’s Church. The Alto Vista Chapel was left deserted and was left in ruins.

The old Spanish cross that had originally hung in the original chapel made its way down the paths of history to Francisca Henriques Lacle, who was a schoolmistress who was in charge of a school for girls. She began to search for the ruins of the old chapel and finally found them. Through hard work and perseverance, she was able to persuade the Catholic Church that the rebuilding of the chapel was a good idea. By 1950 she had raised enough money to rebuild a replica of the old statue of the Virgin Mary which was later place in the rebuilt Alto Vista Chapel.

In 1952 the current chapel was built atop the original location. The current chapel is visited by people from all over the world and hold services weekly officiated by the priest located in Noord.

The chapel on the hill is a focal point for residents and visitors alike of peace and tranquility. The isolated location away from the hustle and bustle of the tourist trade allows for solitude of spiritual essence. People come to visit and spend time in meditation and reverence. Given the view of the sea and the remainder of the island of Aruba, it is no wonder that people seek out the Chapel in order to spend spiritual time.

The Alto Vista Chapel is a symbol of the spirit of the original priest, Domingo Silvestre and his quest to convert the native population. There he worked together, not only in building the chapel, but to put together a better life in harmony to forge the beginnings of a homogenous people on the island.

A pilgrimage is held each year on Good Friday as local Catholics walk from Oranjestad to the Chapel.