History of Aruba, The Arowak Indians 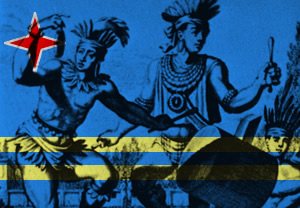 As I mentioned previously, there is very little that is actually know about the first people to reside on the island of Aruba, but there are a number of archaeological digs going on in the area on an almost constant basis to determine a little bit more about the people. What we do know however is that the area for inhabited for many hundreds of years before the Spanish arrived (more on those a little bit later on). In addition to that, we know that that the people who settled here were known as the Arowak Indians, and for the most part they shared a similar culture to the nearby continent of South America. This has been determined by the style of drawings in the many caves here, and of course, the fact that the dead ended up being buried in large urns. This is something that we also saw in the Amazon rainforest, which does sort of indicate that the inhabitants came from around this area, or at least they were joined at a later point where the cultures began to merge.

Other studies have shown that people could been inhabiting the area from around 2500BC. At this time they tended to be a purely hunter and gatherer society, although there also appeared to be a bit of structure in the society. Other findings have shown that men tended to hold a prominent place in society. Over time, the society became a lot more advanced, with signs indicating that they began to produce pottery, this was around 900BC.

Over the years, there have been a number of digs near Venezuela, particularly around Coro. A lot of pottery was dug up around here, which did bear a resemblance to the pottery which had previously been found in Aruba. The methods for making this property was also fairly similar to those that lived on Aruba, not to mention similar tools, and of course cultures.

Digs have been going on in the area of Aruba for at least two hundred years, with some of the most revealing happening between 1880 and 1886. As you can see from what I have mentioned previously, it certainly isn't easy to determine who the original inhabitants were. Although it is likely they were from South America, and it is also likely that they came from a number of different parts of South America and let their cultures merge. Who knows, maybe at some point in the future, there will be that one big find on an archaeological site which shows us exactly who this people were, and perhaps more importantly, why they even ended up coming to the island in the first place.

Now we are going to fast forward a few years, many hundreds in fact, to find out a little bit about one of the most defining points in the history of Aruba, Spanish rule.