History of Aruba, The Spanish 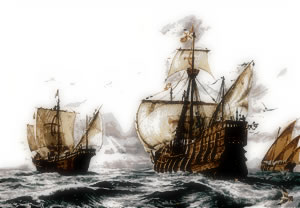 Back in the 15th Century, there were a number of expeditions away from Europe by the , hence why Spanish tends to be a massive influence around the South American regions. Around this time there were two great Spanish explorers, Alonso de Ojeda and Amerigo Vespucci. It is unlikely either of them met each other, in fact, neither probably knew who the other was. However, the both had a key role to play in the discovery of Aruba, mainly because historians do not know which one discovered Aruba first. We know that it was discovered by the Spanish in 1499, along with the rest of the surrounding islands, but we don't know who done it. Recent maps and drawings have surfaced which point to Amerigo Vespucci being the first Spanish person to step foot on Aruba, but this cannot be proven. So for now, just assume that at least one of them discovered it!

So, the Spanish have now found the island, and it is time to give it a name. I must admit, they were very original back then. They decided to call the islands 'The Islas de Los Gigantes'. Anybody who has done even basic Spanish should know what that means, but if you don't, it literally translates to 'The Island of the Giants'. So, why did they do this? Well, because the people who originally inhabited the islands (the aforementioned Indians) were actually very tall, especially compared to the Spanish. See, very original right? The whole region tended to be known as the 'Islas Inutiles'. This literally translates to 'useless islands'. So, why did they call it that? Well, because there was no gold, silver or places to farm on the island, well, at least they thought. We will come to that a little bit soon.

At the start, the Spanish and the Indians co-inhabited. It wasn't the best relationship due to the language barriers, but it was functional as the Spanish didn't really have any usage for the island, and thus they didn't hang around here too much. In 1513 they suddenly came up with a use though, and this is something that would surprise many of the Indians that inhabited Aruba.

As you probably know, the Spanish were very industrious. This means that that around the world they had set up a number of mining outfits at the places they had conquered in the past. Santo Domingo was one of them. Here, they run a couple of Copper Mines. During the early years of these copper mines, they were run by the original Indians of Santo Domingo. Sadly though, disease brought over from Europe managed to wipe all of these native Indians out. I am sure the harsh treatment by the Spanish didn't help too much either. Anyway, the Spanish deported all of the Indians from Aruba, leaving it uninhabited for the first time in thousands of years. The islands would remain like this for a while yet with the Spanish only dropping in once in a while to see how everything was going.