History of Aruba, The Dutch 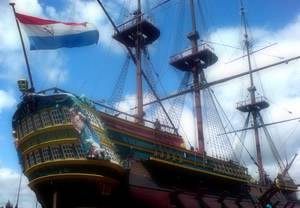 A couple of years after the deportation, the Spanish needed a bit more space. As a result, they turned Aruba into something which they dubbed a 'Rancho'. This basically meant that a number of animals such as donkeys, horses, pigs, sheep, goats and cattle were free to roam the land. Most of these animals had been imported from Spain, and of course, the Spanish needed to work out where they could store them. A few Spanish people came to live with the animals, and a few of the Native Indians were returned who would slave away on the Rancho ensuring that it stayed in perfect condition.

Around this time, the Dutch done the same as the Spanish did all those years ago and start exploring the world. They weren't on the search for rich resources though. Oh know, they were on the search for salt to power their booming herring fishing industry. Now, in the past, they were able to source this from Spain and Portugal. This was great, until the relationship soured between the countries, leading to the famous eighty year war, which as the name suggests, lasted eighty years! During this time, they needed to look to the Caribbean for their salt resources. Of course, they may have been able to pick some up from closer to home, but hey, if you have the chance to go to a really hot location to do your work, you would too right?

Now, as the Dutch began to gather more and more salt in the area, they were sending more and more people over there. At this time, the Dutch didn't really have a base of operations to call their own. That all changed though when the Dutch discovered Curacao in 1634 and began to conquer it. This was the base of operations for the Dutch throughout the eighty year war. Of course, with an island being flanked by two others that were owned by your enemy, something needed to change, thus the Dutch took the easy option and conquered both Bonaire and Aruba to stop the Spanish Armada coming close.

In the first few years of Dutch occupation, the Dutch done more for the islands than the Spanish had ever done. One of the first ventures here away from military action came from the Dutch West India Company, or the WIC. Their job was to develop the islands into an agricultural colony, something which the Spanish had been reluctant to do before, mainly because they believed the land wasn't good enough for it. Aruba was given the task of looking after horses and goats. In the early days, there were so many goats here, Aruba managed to earn itself the nickname 'Goat Island'. The Dutch were also a pretty industrious lot, and they discovered wood known as 'Brasilwood'. All of this was sent back to Amsterdam where convicts were given the task of changing it into something awesome. In this case, a material for red paint, which as we all know is incredibly useful!

Even though the Dutch were in control of the island, there was very little to no Dutch inhabitants here. There was a commander in control of the island from Holland, who had their own assistants, but the only people who officially residing on the island were the native Indians. Their job was to keep a check on the cattle in the area, and also cut down the wood. It is believed that they were actually paid for both of these jobs, which does mean that they weren't slaves.